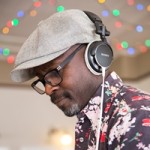 Jerome’s love of music began as a child, listening to the reggae, country and big band tunes that his parents would play which reminded them of Jamaica. As he grew up, he began dancing on the London Club Scene of the 80’s, in venues such as Crackers, Global Village and Jaffa’s. As a regular clubber, he would often get to meet the DJ’s playing the sets, such as George Power and Paul ‘Trouble’ Anderson. A chance meeting with Perry Louis in the Jazz Café in Camden, led to Jerome joining the JazzCotech dance group, and dancing professionally with them, touring across Europe and Japan for more than 10 years. Jerome now teaches dance in Margate and London.

Although he had been part of the Club Scene for some time, he had never DJ’d. in the early 2000’s a good friend kept nagging him to ‘come down and play some tunes’, in a tiny club off Tottenham Court Road in which he had a residency. Jerome finally plucked up the courage to bag up some vinyl and play. It was the beginning of his love affair behind the decks as well as dancing in front of them, and since then, Jerome has played in various London venues and DJ’d at corporate events.

Nowadays, Jerome is based in Margate Kent. He’s still as passionate as ever about music, and is constantly searching out new old and new music to play. You will hear him mixing up eras, and playing an eclectic dance based mix from funk to soul and latin, swing to jazz, with a little reggae and ska thrown in too.

If you are Interested in hiring this DJ, feel free to get in touch at jerome@jeromesworld.co.uk